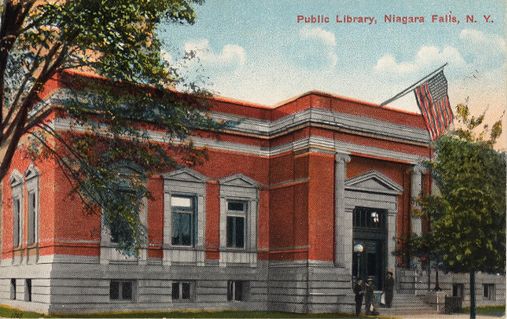 The Carnegie building is a turn-of the-century period piece, one of a special generation of public libraries endowed by Andrew Carnegie. The libraries hold a touchingly human as well as enduring place in the history of American philanthropy and social history. They stand today as a record that the U.S. public library movement was not initiated through government programs or by public demand but rather due to the farsighted generosity of an extraordinary individual.


Some $45 million of Carnegie’s vast fortune went into the construction and endowment of library buildings, however, a community was not simply given a blank check by the Carnegie Foundation in order to build a library. The $50,000 grant awarded to Niagara Falls in 1901 came with the stipulation that the city must spend $7,000 annually for the building’s maintenance. A main library and a branch already existed in Niagara Falls with a total of about 10,000 books. It started with 40 books donated back in 1814 by General Parkhurst Whitney and was known originally as the Grand Niagara Library. The Niagara Falls Library developed an unusual reputation for its collection of books for the blind.
The City of Niagara Falls was established in 1892 and by 1901 when the Carnegie grant was secured the existing library was one of “village proportions” facing “city needs”. The site on Main Street in the former village of Suspension Bridge was chosen in the estimated center of the reading population of the day and in 1904 at the time of its official opening, the new library boasted the greatest circulation in proportion to population in New York State.
E.E. Joralemon, a local architect, designed the structure with a capacity for 50,000 volumes. The contractor was George B. Long and the plumbing and electrical work done by F.W. Oliver Company.
The library grew with the years, and by 1950 the building designed for 50,000 volumes had to deal with 116,000. The auditorium on the lower level was converted for stack space, and a number of branches were established. The continued concern for handicapped readers led to the establishment of a microfilm book service for the bedridden, said to be the first of its kind in a New York State Library. The equipment was given by the Scottish Rite Masons in 1949 and was designed for bedridden patients unable to hold heavy volumes. The microfilmed books are projected onto the ceiling.
The seventy year old library was vacated in 1974 for the new Earl Brydges Library which was built several blocks away. The building served as an Art Center housing the Council of the Arts on the main floor from 1974-1981 with the Community Music School in the basement. In March of 1981 the building was temporarily reclaimed as library space while remedial work was completed on the Early Brydges library over a period of 16 months. The Feder School of Classical Ballet occupied the main floor in the 1980’s and the Department of Community Development moved into the building in 1992 using all of the space. 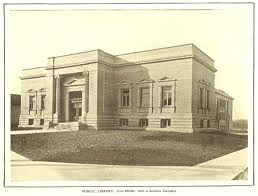 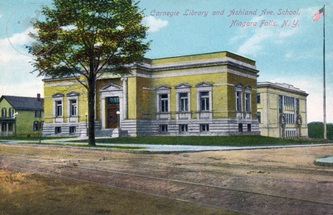