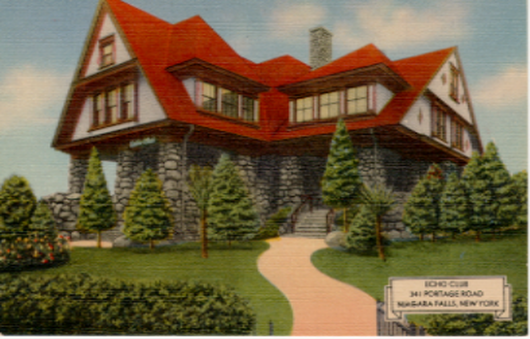 The Echo is an elegant and historic stone structure on a historic thoroughfare in the heart of Niagara Falls. The Echo building, at 341-343 Portage Road between Niagara Street and Welch Avenue, has been home for many years to the Echo Society of Niagara Falls. The building harkens back to one of the most important personages of Niagara Falls, Thomas V. Welch.The land on which the building is situated was once the property of John Stedman. He started a farm at Schlosser, at the head of the portage, operated the portage for the English, and was leading a wagon train on the portage when the Devil's Hole Massacre occurred in September of 1763. Another owner of the property was the famous Peter B. Porter. Porter served with distinction and fought in many battles of the War of 1812. Porter also served as President John Adams Secretary of War, was a member of Congress and served in the New York State Assembly.
Welch, a businessman, politician and first superintendent of the Niagara Reservation, the first state park in the nation, originally had the Echo building constructed. In 1883, he bought the land bordered by Portage Road, Falls Street, 19th Street and Niagara Street (then called Plank Road). In 1889, a newly fromed company called The Niagara Falls Power Company, undertook a herculean construction effort to dig a canal 250 feet wide and 12 feet deep.  Much of the stone for the building and fireplaces and for the carriage house built out back came from excavation of the power tunnel. Welch Avenue was later constructed between Niagara and Falls streets. Welch had the stone structure built as a duplex in 1892. He occupied one side and his relatives the other. In 1899, there were a dozen members of the Welch family living there.  The building's foundation is nearly two feet thick and made of Lockport dolomite stone. Glacial stone was used for the porches and exterior walls. The second and third floors are wood frame. In 1920, the building was sold to Alexander Zaliski, a Polish immigrant who became a prominent businessman. Among other enterprises, he opened the Falls National Bank on the corner of Portage Road and East Falls Street.  Zaliski and his brother and sister lived on one side of the Echo building, while the other was rented to Dr. Nicholas Rozan.
The Echo Society purchased the building on May 1, 1931, and members have made many renovations and improvements over the years.  For nearly a century The Echo has served as the center of Polish-American activities in the Niagara Community. A longtime member and chairwoman of the Echo Board, Mrs. Jean Dojka, prepared the historical information several years ago when the building's centennial was celebrated. On March 3, 2003 The Echo was officially recognized as a Historical Landmark.  For the first time in history the Echo staff cordially invites all to be a part of its memorable past and its exciting future.


- Adapted from the Niagara Falls Historic Preservation Board 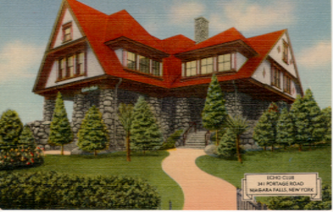