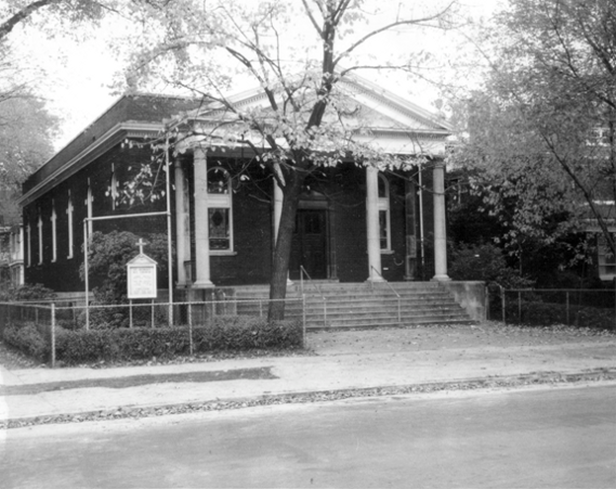 During the approximately 15 years prior to World War I, more than eight million immigrants were received into the United States from Europe, including among them the Lithuanians who had entered the country by the thousands since the end of the 19th century. Records do not tell when emigrants from Lithuania first settled in Niagara Falls. However, it suffices to say that because of employment opportunities presented in the city at that time, these emigrants settled in the south side of the city, and by 1902, they were numerous enough to establish the St. George's Benevolent Society (St. George's Lodge), which later (July 11, 1911) was incorporated by the State of New York.

Because these emigrants were predominantly Catholic, they began to discuss among themselves the necessity of getting a priest to minister to their spiritual needs. St. George's Church came into being as a direct result of the Lithuanian desire for spiritual direction. The group responsible for the church's establishment was St. George's Benevolent Society.

The Society bought a lot at the present site in Falls Street with the intention of building a church. The land was part of the old Steadman Farm and consisted of 5 or 6 lots owned by Matthew Urbanas. Two of these lots were sold to St. George's Society on July 7, 1911 as documented in Liber 360 of Deeds. To offset rumors that a tavern was to be opened on the opposite corner, a group of the Society's members gathered at night and built a small wooden structure, placed a cross on its top, and called it St. George's Church. The result was that the tavern could not open because of the proximity to the church. Following a successful fund campaign, in 1915 a small white building was constructed on the lot. Father Pitass, pastor of Holy Trinity, blessed the little church and a bell was donated by Holy Trinity parishioners to ring out the Angelus and call worshippers to Mass. That same bell continues to ring in the present church.

Years later, as plans for the new church building were being prepared, the little white church was moved to an adjacent lot owned by the parish and was used by French speaking Catholics in the area under the name of St. Ann's. Later, for some time the little church served as a meeting place for various societies and as a recreation hall for the young people of St. George's. It was eventually torn down because of deterioration in approximately 1942-45.

Thus, St. George's R.C. Church actually came into existence when that little white church was built in 1915, although the church was not officially incorporated until April 28, 1917. St. George's Benevolent Society sold the plots of land on August 7, 1917 to the church for $2,250.00. Corporation warranty deed is recorded in Liber 417 of Deeds at page 294.

For the years until 1917, the spiritual needs of the Lithuanian people, such as Baptisms, Marriages, and Funerals, were performed at either Holy Trinity Church or Our Lady of the Rosary Church. However, during these years, the Lithuanian community continued to strive toward establishment of their own parish.

Fr. Satkus, Malinauskas, and Vaicekauskas had no rectory to live in. They lived at one or another home of the parishioners. On August 12, 1918, Fr. Leo Vaicekauskas purchased a home at 1624 East Falls Street from Alexander Zaleski (a real estate agent) for the sum of $4,700 and established a rectory, which was more than a half block from the church.

The little wooden white church was the spiritual home of the Lithuanian people of Niagara Falls until 1927, when through the efforts of Fr. Joseph Daknys, who served as pastor from July 1925 - July 1928, a new rectory and the present day church were built. The contract for the new Church was signed March 10, 1927 with Lynch and Bremer Contractors.

The architect of St. George’s is Henry G. Mess. Henry Mess appears to come from a line of skilled builders; a father and brother who were stone masons (George and William, 1900 census; 1905 City Council Directory indicates William designed a brick veneer dwelling at 27 Ontario Ave). Henry Mess seems to have begun work as a professional architect in his hometown of North Tonawanda. In 1906, he designed a large home for John Mahar, a wealthy coal businessman at 345 Goundry Street. A classified advertisement in the Niagara Gazette in 1911 (7/15/1911) proves he moved his practice to Niagara Falls at Ontario Avenue where he had many plans and photographs of houses and flats, that he drew plans to specifications, and supervised construction. His apparent success afforded him to move his office from Ontario Ave to the Rieckhoff Building at Main Street and South Avenue by 1927 (1927 Niagara Falls City Directory).

According to Niagara Falls City Council yearly summaries, some of Henry Mess’s work includes the Police Substation No. 2 (later, the Niagara Falls Historical Society) on Ontario Avenue and Main Street (1927); the Firehall at Walnut Avenue and Hyde Park Boulevard (City Council 1932; Niagara Gazette 1/15/1932, pp. 2); a store with an apartment on Lot 8, Block Y on Highland Avenue (1938); and a remodel of the building of Frank Soczak at 2268 Niagara Street into a two-story using brick veneer instead of solid masonry construction (1940). Additionally, Henry Mess looks to have been an entrepreneur, having requested and awarded permission for a gasoline station in front of the 1912 Ontario Avenue lot (City Council Directory 1918 and 1919)

On April 24, 1927, Bishop William Turner of the Buffalo Diocese, with the assistance of the Chancellor of the Buffalo Diocese, Msgr. Edmond Britt, and Pastor of St. George's, Fr. Joseph Dakynys, and a large gathering of the parishioners, blessed the cornerstone of the present church.
The official dedication was September 4, 1927. The debt of about $38,000, incurred for the church and rectory, was reduced in the course of 12 years during the pastorate of the next priest, Fr. Francis Gelumbis. He was pastor of St. George’s from July 14, 1928 - August 1940. Despite the financial difficulties of the depression, the parish mortgage, interest on the mortgage and notes, remedial work to the church, hall, rectory and improvements to the grounds were realized. With the assistance of only 60 families supporting the church, Fr. Gelumbis was able to disburse a total of $63,751.99 of the parish obligations.

Upon the departure of Fr. Gelumbis, the Marian Fathers were invited by the Bishop of Buffalo to administer the spiritual and temporal needs of St. George's Parish. From 1940 to 1943, the following Marian Fathers served as pastors of the church: Fr. Casimir Matulaitis, MIC. (August 1940-1941) Fr. Joseph Pauliukonis, MIC (1941-1942) Fr. Michael Urbanavicius, MIC (1942) Fr. Adam Yeskis, MIC (1943) Fr. Frank Aukstakalnis, MIC (1943-1950). Father Aukstakalnis was pastor of the parish for 7 years until his tragic death, February 20, 1950 when he fell from a ladder while installing a light fixture in the church. During his pastorate, Fr. Aukstakalnis improved the church hall by placing tile on the floor at the cost of $3,603.83.

After Fr. Aukstakalnis' tragic death, the following Marian Fathers served as replacements to administer St. George's: Fr. Vincent Raitelis, MIC (1950) administrator Fr. Frank Bulovas, MIC (1950) administrator Fr. Joseph Augunas, MIC was appointed pastor in 1950 with Fr. Alphonse Micka named as his temporary assistant in 1953. During Fr. Augunas' stay, the final debt of $18,000 was completely paid and at his farewell banquet on August 23, 1957, the burning of the mortgage took place.

Fr. Vincent Parulis, MIC, arrived August 23, 1957. - During his pastorate, Fr. Parulis remodeled the interior of the rectory, adding new office space. He installed a new heating system in the rectory, the church, and the hall. A large sacristy, two car garage, and updated church hall and kitchen were accomplished for the sum of $45,000. Through the hard work of Fr. Parulis and with the generosity of parishioners and friends of St. George's, and most of all through the intercession of God, St. George's remained a viable and financially stable parish.

According to the Buffalo Diocese weekly publication, The Magnificat (Dec. 16, 1971), St. George's Parish had 175 families and 243 individual members. Of the members, 35% were of Lithuanian descent and 65% were of mixed nationality, showing the demographics of the Church was already changing. In 1978 the number was 75 families of various descent.

In 1966 Fr. Parulis left for Chicago and was replaced by Fr. Vincent Andriuska (1966-1968). During his short pastorate, Fr. Andriuska’s elderly father and mother lived with him in the rectory. It was also during this period that, much to the dismay of the parishioners, the Stations of the Cross were repainted the copper color. The next priest was Fr. Stanley Saplis (1968-1970). Fr. Benjamin Uzdavinis served from 1970-1972  In 1972, Fr. Parulis returned to St. George's and served again as pastor from 1972-1978.

In 1978, Fr. Parulis was reassigned to the preparatory school in Marianopolis, Connecticut. The Marian Province of Chicago did not have any available priests for replacement so with the departure of Fr. Parulis, St. George's was scheduled to close. However, the Parishioners petitioned the Bishop of Buffalo to keep the Church open.

During the transition, Fr. Harold Nuwer was appointed by the Diocese as temporary administrator (November 11, 1978-January 1979).  On February 2, 1979, a large number of Parishioners gathered to witness the installation of the temporary Pastor, Fr. Miecislaus Leszczynski, and his Associate, Fr. Theodore Kocjan.

Fr. George Maj, replaced the temporary administrators on May 15, 1979 with the approval of His Excellency Bishop Edward Head, who added for Fr. Maj an additional duty of substitute chaplain at Mount Saint Mary's Hospital in Lewiston. Fr. Maj was called to serve as a Military Chaplain in the US Army in 1981.

On June 15, 1981, Fr. Severyn J. Koszyk was assigned as Pastor of St. George's. Fr. Koszyk also continued at the same time his service as a part time chaplain at the Veterans Hospital in Buffalo. He also functioned as the temporary head of the North Tonawanda Pallottine Community after the death of Fr. John Casimir Parzyszek until being replaced in June 1984 by Fr. Anthony Zemula. The Church has remained open until 2008 as a debt free, viable parish and administered by the Pallotine Fathers.

St. George's R.C. Church, the only historically Lithuanian Parish in all of Western New York, has never drawn a priest from the Diocese of Buffalo, except for a very short period in 1978, before Fr. Koszyk of the Pallotine Fathers was assigned to St. George's.