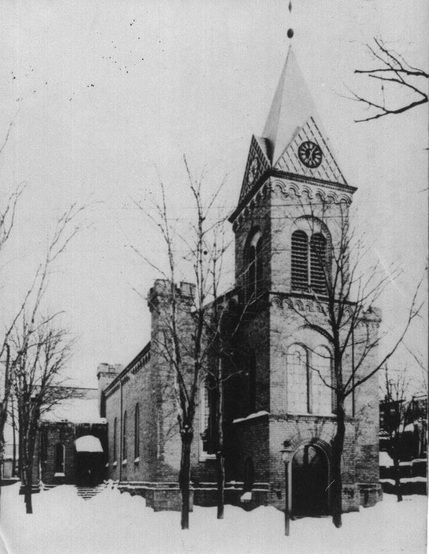 The First Presbyterian Church in Manchester (later Niagara Falls) was initiated in 1824 by the Rev. David Smith, Isaac Smith family, Mrs. Stephen Childs and Abraham Mesler. On November 28, 1826 a public meeting was held to officially organize the “ First Presbyterian Society of Niagara.” The congregation originally met in the schoolhouse at Falls & Mechanic (later, Prospect Street) until 1831, when a new wooden church was built at the corner of Falls & First Street. The Union Chapel was a small building built by General Whitney, for the use of all denominations including the Methodists and Episcopalians. The original bell (now located within the existing First Presbyterian church tower) was hung outside because there was no steeple. It is believed that this was the first church building built in the community of Manchester, later Niagara Falls.

The Union Chapel was later sold to the Methodists and the purchase price applied to the cost of a new building, the present day church. The lot the Church stands on and much of the $8,000 in construction costs came from the Porter Family. It is believed that construction was started in 1849 and completed by 1852. The clock in the steeple, installed in 1850, was known as the village clock.

Additional renovations to the Sanctuary occurred between 1956-1957 when most of the wood paneling and pews were changed from walnut to oak. The stained glass window that faced the Sanctuary was reversed to face the Fellowship hall. The fireside room and library were updated and the basement renovated into Sunday school rooms.

In 1958, the former YMCA building, immediately north of the Church, was purchased to expand facilities for the Sunday school and children’s activities. In the 1970s, the Church was caught up in the “Urban Renewal Program” which among other things resulted in the demolition of the YMCA building. The vacant lot was later sold back to the Church for a dollar and converted into Fleming Park. In 1974 Fleming Park was dedicated to the Flemings, long time members and patrons of the Church.

In 1973, the entrances into the Sanctuary were remodeled. The round arched double doors was shortened and a new elevated entrance way installed. The ceiling was renovated in the Sanctuary a ceiling dome added. Besides structural changes, a PA system and new air conditioning was added. Between 1998-1999 the stone exterior was re-pointed and refurbished and the cornices and the verge boards repaired and repainted. 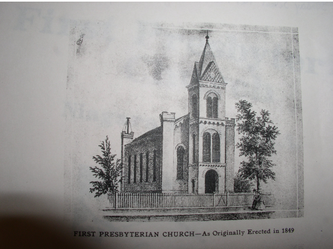 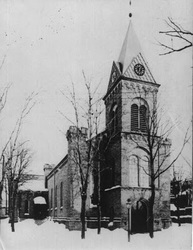