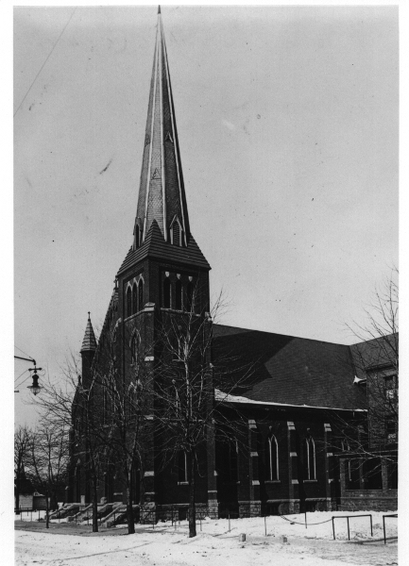 Sacred Heart’s origins date back to 1855 when Bishop Timon authorized Fr. William C. Stephens to establish a mission church to be known as St. William’s. This church serviced the growing community of Suspension Bridge (as the North End of Niagara Falls was known at the time). The mission was housed in temporary quarters while a formal church was built. This church was constructed in 1855 and consecrated in 1856 as St. Raphael’s. St. Raphael’s was destroyed by fire in November 1888.
It is believed that an original rectory was built sometime between 1861-1882 and was possibly located at the northeast corner of Superior Street (now Eleventh Street) and South Avenue i.e. the west side of the present day church. Sometime prior to 1888 a school was also built on the east side of the church; this building was later converted to a convent prior to 1897 and demolished prior to 1914. This school was built for the Visitation Nuns.

Construction on the present day church was initiated in January 1889. Fr. Hines moved quickly, and the foundation of a new church, complete with a cornerstone, was laid May 15, 1889. On Sunday, February 18, 1890, the church of the Sacred Heart was dedicated.

This former Lutheran church was demolished to make way for the present day school (built 1899-1900) and convent (built 1909). Under the direction of Father James Roche, construction on the school began in 1899 and was completed and officially dedicated on March 19, 1900. The cost for construction was $28,000.00. In 1904 funds were raised to replace the church roof and in 1906 renovations were undertaken to the church interior which included new stained glass windows placed behind the main altar. Father Roche was also instrumental with the construction of the present day altar which is alleged to have been copied from a church associated with the Vatican.

In 1909, Father Roche supervised the construction of the present day convent to provide adequate housing for the Sisters of Saint Joseph who were serving at the school. The last building to be built was the present day rectory on Eleventh Street.

Father Thomas F. Gleason (1926-1937) spearheaded some major changes to the physical church as the congregation continued to grow. Significantly, the brick exterior was completely stuccoed, the confessionals were moved to the rear, the altar rail was extended, and St. Anthony’s shrine was abolished to create an exit in the front of the church.

Monsignor John E. Rochford (1943-1960) oversaw regular improvements including: an expanded parking areas, a playground for students, new roof on the church, improved heating and lighting systems, remodeling of the church hall and the installation of the present day pipe organ. One of the last projects undertaken by Msgr. Rochford was the addition to the school, later known as the ‘new school’ located on the north side of the original structure. Construction began in June 1959, and at a cost of $300,000, when completed in February 1960 consisted of six classrooms and an auditorium-gymnasium. The old school building was also renovated and the complex accommodated an enrollment of 900 students in September 1960.
More recent work on the church includes; redecoration of the church interior in 1972 and a two year renovation project initiated during Father Donald Armbrewster Pastorship (1974-1979) which included major structural work both inside and out, interior painting, repair to the organ and installation of a carillon in 1976.

Due to declining enrolment and an overall population loss the school addition was closed in 1979 and in 2001 Sacred Heart School finally closed its doors. The church itself was closed in 2008.