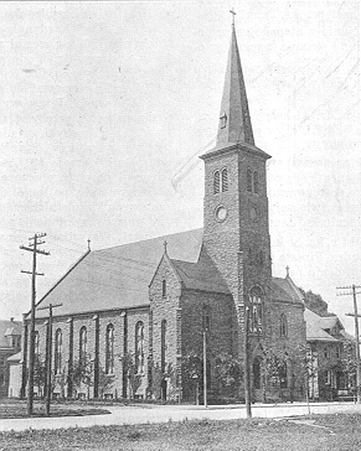 Great numbers of Polish immigrants came to Niagara Falls to find economic, social, political and religious refuge during the early twentieth century. Most of the Polish people resided on the East side; however, they were scattered throughout the city but they found their shelter in the nucleus of the east side “Polonia”. According to the records, the first Polish immigrant to settle in Niagara Falls in 1887 with his family was Francis Ignaszewski who gained employment like thousands of fellow Polish workers at the “Power House” (Niagara Falls Power Company). Meanwhile, not having a church of their own, the immigrants in Niagara Falls attended Mass at St. Mary’s of the Cataract Church on Fourth Street. In 1901, Jacob and Agnes Pasek, Jacob Kaszyca and Szczepan Ciesielski approached the Reverend Peter Pitass, assistant pastor at St. Stanislaus Bishop and Martyr Buffalo Parish to organize a new parish in Niagara Falls to be named Holy Trinity Society of Niagara Falls with Reverend Peter Pitass the first pastor. A small wooden church was built on Joseph Stec’s leased lot on 12th and Falls Streets and was dedicated in 1902 with all services and teachings in the Polish language.

Land for the present church was acquired for $6,0000 from property owned by Alexander Zaleski located on Falls Street between Fourteenth and Kosziuszko (Fifteenth) Streets. The property transfer was registered in 1902 in the name of “Holy Trinity Roman Catholic Church Society of Niagara Falls, NY”. With the purchase of the property, the small wooden church was transferred from the 12th Street leased land to the parish’s own land on 14th Street. The church was painted to resemble a village church. By the beginning of 1905, the little church could no longer accommodate the ever-growing number of parishioners. Schmill & Gould of Buffalo were hired to design a new church. Schmill & Gould were well known architects of the time for the following Buffalo parishes: Assumption, St. Gerard’s, Corpus Christi, Sacred Heart and St. Adalbert’s School). A contract was awarded to Braas Brothers Company on October 2, 1905 to build the new church for $34,700. Material chosen for the building was stone from the hydraulic canal. By December 1905, the foundation was completed and the walls were erected in the spring of 1906.

In May 1906, a contract was awarded to build a rectory for the clergy to be designed by Buffalo architect Wladyslaw H. Zawadzki. Zawadzki was an important Polish-American who designed the Polonia Hotel, Hodkiewicz-Cohen Bakery, Lysowicz’s Wholesale Grocery Store, Queen of the Most Holy Rosary Church and the Polish Union Hall. The rectory was built in 1906-1907. A one-story addition was later added to the south elevation in 1966.

The architect for the garage, which was built in 1907-1907, was also Wladyslaw H. Zawadzki. Its original use was as a stable for the priests’ horses and carriage and later was altered to accommodate vehicles.

In August 1908, the original church was renovated into three classrooms with the teaching nuns occupying the balance of the building. With increased enrollment, there was a need for additional teachers. Since the living quarters were inadequate, the parishioners decided to create a convent. They renovated the nuns’ existing quarters in the old church into classrooms. The architect of the convent was Wladyslaw H. Zawadzki and the building was built in 1909-1910. The convent was later converted to serve as a retirement home named “The Holy Trinity RC Manor”.

The original school was located on the second floor of a building owned by Jacob Pasek on 13th Street in 1904. By 1910 there were 240 pupils in the school. Rev. Alexander Pitass became pastor in 1911 and began plans and the eventual construction of the present school building. The school was designed by architect Wladyslaw H. Zawadzki and built 1913 to 1914. The Franciscan Sisters of St. Joseph taught classes continuously in this school until the late 1960’s. The school was finally closed in 1974. At that time, Rev. John Praczkajlo utilized the classrooms by leasing them to the Head Start program, which was experimentally initiated in Niagara Falls.

In their plan for taking care of parishioners from birth to death, the parish acquired 4.72 acres of land in Lewiston in 1910 for a cemetery. After purchasing more land, the cemetery consisted of 54.31 acres in 1949. However, the Power Authority and the New York State Thruway Authority later partitioned 25 acres leaving approximately 29 acres in parish hands.

In 1912 Rev. Alexander Pitass had three church bells made and installed. In November 1928, Rev. Francis Wasik was appointed pastor to Holy Trinity and remained for twenty years carefully managing finances through the depression and recovery period until his death in 1948. The pastor had the church and murals repainted in 1939.

Under the direction of Rev. Cyman, considerable work had been done in improving and modernizing the heating and lighting systems, redecorating the church interior and pointing up all church properties. Cafeteria facilities for school children were also added. The original ornate side altars were removed as well as the arched doors leading to the sanctuary on each side of the altars. Donations were taken for new altars. People were disappointed in the wider, plainer altars covering the section where the doorways had been. New lantern type chandeliers replaced the beautiful hanging chandeliers of many rounded bulbs and crystals. M. M. Rzeznik of Buffalo, a specialist in ecclesiastical painting, painted the murals in the sanctuary.

In 1982 Rev. Leonard Biniszkiewsicz was appointed pastor of Holy Trinity Parish. Rev. Biniszkiewicz was responsible for renovation of the cemetery chapel and the young infant room in the rear of the church. Also, much needed lavatories were added to the vestibule. When it came to eliminating the hand-carved confessionals and the beautiful chairs in the sanctuary, people began to protest. Life-size statues of kneeling angels in the sanctuary, one on each side of the main altar, were said to have “flown away”. The carved Communion railing was also eliminated to the dismay of the congregation. At this time, a rear sacristy was built in the church and an addition was added to the rear of the rectory. 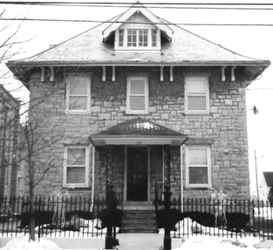 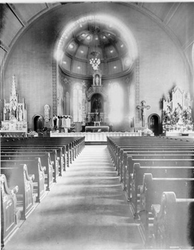 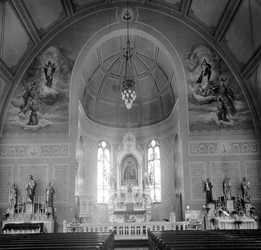 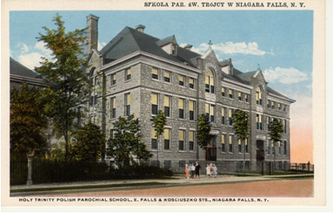